Reading this book gave me that same eerie sensation that I felt while I was watching A Quiet Place and that same thrilling excitement while watching The Walking Dead. In a Quiet Place, it’s the noise that people avoid doing whilst in The Bird Box, it’s seeing. In both the Bird Box and The Walking Dead, the characters have to always be on alert, should not let their guards down and be sensitive with their surroundings because they never know when or where the attack will happen. The only difference is that in the latter they can see where the attack will come but in the former, no.

After finishing Turtles All the Way Down by John Green, I decided to move to another genre. This time, I chose horror as it’s been a while since I last read one. This is one of the books that have been slowly collecting dust in my bookshelf and I am glad I finally picked it up. This book is an example of a perfect blend of suspense and horror mixed in with drama and that dystopian vibe.

The book follows the story of Malorie and her two children as they try to navigate a world that was overcome with a scary phenomenon. In the story, people start seeing “something” that drives them to madness, murder and suicide. No one knows what that something is. It’s a phenomenon that started in Russia then immediately made it’s way to Michigan where the main character lives. Humanity was left without an answer as to what could this “something” be, where this things came from or what do they need. The communciation systems, the power, and water systems also started going down adding more burden and fear to the people. For safety and security, people began hoarding up supplies, boarding or draping blankets up every entries to their homes and stopped going out. The story begins with Malorie finding out that she’s pregnant and answering to an ad in the newspaper which offers sanctuary to survivors. There she meet new individuals, refugees who are also coping with their new situation. They are also paranoids with every noise outside. In this world were everyone will do anything to survive, will she fully trust these people? Who’s sane and who’s not? Trusts were tested, decisions were questioned and motives were doubted.

Without a doubt, adapting to this new situation would be hard for an adult but what more for someone who has two four year old children in her care. That is the situation and dilemma of Malorie, the main character. The plot switches from her living with the strangers whom he eventually treated as family to her living just with her two kids in the same house. Mallerman seamlessly did the transition with explanations as to what happened in between that helped build up the tension. From the time of their birth, Malorie had to train the two young ones to adapt. She trained them to go out and do errands blindfolded and ran some tests (at times harsh) to enhance their hearing abilities and become sensitive to their surroundings that would help them when they eventually had to leave their place and go search for a safer and more stable place to live. And so what happens when they finally go out? Will their hearing abilities be enough against the unknown “things” outside that might kill them? Will their will be enough to withstand the pressure and fear of going out in a world that they’ve tried avoiding? Will their trust with each other not fail them along the way? Will they be successful in their quest? For Malorie and the two kids, it became a battle of both physical and mental prowess. It became more than a battle of survival. How would you survive an attack if you don’t know where it will come?

“It’s better to face madness with a plan than to sit still and let it take you in pieces.” ― Josh Malerman, Bird Box

The book became very effective in delivering tension, drama and terror. The author knows when to surprise its readers and when to suspend the thrill making the readers want to go further in the book. It’s just that sometimes you may not help but pause because there is too much that you end up pausing for a while, breath and ready yourself to what will happen in the next chapter. The book’s original story and author’s impeccable writing is very perfect in setting that eerie feeling. The book’s unique premise really packed up a lot of surprises.

It was not hard to connect to the characters because the author was able to make me feel being in their situation and perfectly set the tone of every scene. I was able to feel everyone’s desperation, fear and longingness. Well-chosen words and right pacing became vital for me as a reader to immediately understand, connect and eventually feel that I am a witness to Malories’ and other characters’ dilemma. It’s indeed a total page-turner.

The book also portrayed the characters well, especially Malorie. She’s a complex character who displayed sympathy, strong will and determination. She’ll do anything to protect her children. The flashback story-telling worked well in portraying her as a character with depth. The author crafted it in a way that is not confusing to readers. By reading about her history, I was able to empathize with her situation, understand her actions and believe with her.

I like how the “things” lurking on Earth were not described. It added more mystery to the story. It played tricks to my mind thinking how vicious they can be and how terrifying they can be once you remove your blindfold. The fear develops on your mind and you create your own monster. The scene where Malorie and her children already went out blindfolded is a totally intense. Being blindfolded and getting on a boat to go on a journey to a place you don’t not know if it really exist is really an insane move but insane situations call for desperate moves. Being blindfolded, the readers are left with limited descriptions about what the character hear or feel. The readers are left with also like being blindfolded too. The best that readers can do is guess and hope that it’s not something that would kill any of the three. Is SOmeone stalking them? Is that a snake? A bear? Or the thing right next to their boat? No one knows if someone will strike them any moment. The experience is really gripping and immersive. You can’t help but hope that that scene will immediately end. I also like how the book has an open ending and no explanations were made. It opened a lot of possibilites for the book in the future. Hopefully a sequel.

Overall, the book became very effective in depicting that there’s no greater fear than fearing the unkown. What you can’t see is definitely more terrifying than what can be seen. This is a book that will make fixated and your heart pound from beginning to end.

Netflix already acquired the rights of the book and will develop the movie which will star Sandra Bullock and John Malkovich. Susanne Bier was announced as the director and screenplay will be written by Eric Heisserer (Arrival). (Source: The Hollywood Reporter) I’m super excited for this one! 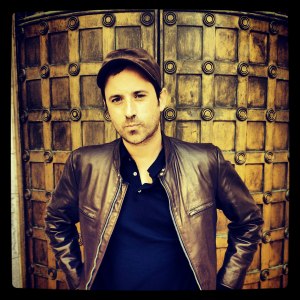 Josh Malerman is an American author of novels and short stories and one of two singer/songwriters for the rock band The High Strung. Before publishing his debut novel Bird Box with ECCO/HarperCollins, he wrote fourteen novels, never having shopped one of them. (Malerman’s debut novel Bird Box was published in the United Kingdom and United States in 2014 to much critical acclaim.

Being the singer/songwriter of the Detroit rock band The High Strung, Malerman toured the country for six years, as the band played an average of 250 shows a year, and Malerman wrote many of the rough drafts for these novels in the passenger seat between cities on tour. He says this about those days: “I never saw the books with dollar signs in my eyes. It was no hobby, that’s for sure, it was the real thing and always has been, but I was happy, then, simply writing, and while I blindly assumed they’d be published one day, I had no idea how something like that occurred.”